Return to 8 Astrophysics – Part A “Units”

8.13P describe the past evolution of the universe and the main arguments in favour of the Big Bang

8.15P describe that if a wave source is moving relative to an observer there will be a change in the observed frequency and wavelength

8.16P use the equation relating change in wavelength, wavelength, velocity of a galaxy and the speed of light: 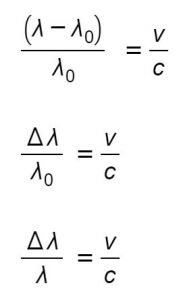 8.17P describe the red-shift in light received from galaxies at different distances away from the Earth

8.18P explain why the red-shift of galaxies provides evidence for the expansion of the Universe.