Use these quick notes to help you revise each topic from the Chapter. You can also download a PDF with revision cards to print double sided and 2 slides per sheet to get small cards to play revision games… Animated Science Physics AS Revision Cards Chapter 6 but the information is the same as on this post!

Conditions for the Equilibrium of Three Non-Parallel Forces

If we say that an object is under the influence of forces which are in equilibrium, we mean that the object is not accelerating – there is no net force acting. The object may still be travelling – but at a constant velocity – but in most questions the object will be stationary.

The following ideas will help you to solve problems that involve a body acted on by three co-planar forces.

1. The lines of action of the three forces must all pass through the same point.

Scalars: A scalar quantity is very simply a numerical item such as 7°C or 5kg. It can be in any direction and other examples are mass, density, energy or volume.

Vectors: This is a “scalar” which has a direction or bearing. This means that we can now think about displacement instead of distance travelled. This enables us to think about the motion of objects in more complex ways and define formulae with directions. Other examples are force, velocity, acceleration and momentum.

Vector Equations: When applying Mathematics to Physics problems we find that a scalar such as mass converts one vector to another. F = ma where both “F” and “a” are vectors.

Units: When looking at vector equations such as F=ma the units must balance… Force is measured in Newtons (N),

Vector Journeys: When we have a journey which consists of two vectors such as displacement we find that it adds up to form a triangle. We can then go direct or indirect.

Resultant: This is the most direct route or “result” of the two vectors. We can find this by simple Pythagoras. If we had two vectors at right angles of 3km and 4km…

Vector Components: Sometimes it is more useful to work out a component of a resultant force in vertical or horizontal direction. This also uses Pythagorean Mathematics…

Vector Addition: If you have resolved all the forces, speeds or distances into their x and y components you can then sum all the x’s and all the y’s to find the overall motion. It is like adding lots of little effects to get one resultant or one large triangle. We can also do the same by drawing out the problem to scale.

Vector Triangles: We find that if a vector triangle works for distances it can also mirror the situation with the forces involved. For example if we know the geometry of a car on a slope it will enable us to predict the friction or support forces acting on the slope if we know for example the weight of the car.

Block on Desk: For a wooden block sat on a table it is very simple Newton’s 3rd Law tells us that the forces of weight are balanced exactly by the support forces…

2D Forces: We can think of this in more detail that the sum of all forces is zero on a object moving at a constant speed or stationary. If we can resolve these directions using trigonometry we can create a balance situation…

Childs Swing: This seems complex but it is not if we think of the problem in balance. Imagine that dad is holding the child back ready to swing. All forces balance according to Newton’s 3rd Law. So the Tension in the rope of the swing must balance both Weight and the Pull force from dad. However, tension acts at an angle so we resolve the forces (or split them) into vertical and horizontal components.

Inclined Plane: In this situation the block (or any other object) acts in a similar way to being on a

table but we have to make a triangle of forces. Label them in order…

3) Friction (in line with inc plane)

A common mistake is to get the placement of the 90° corner of the triangle. Also you should notice that there are three similar triangles on this diagram which can all be used to solve problems. 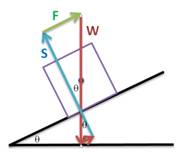 Hanging Weight: We can use the idea of equilibrium for a weight hanging from a string held in two places. It is simple to balance.The problem should be tackled at two triangles and then everything summated…

It simplifies if the angles are equal to… 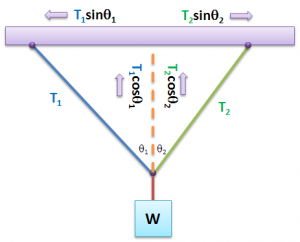 The Principle of Moments

Turning Effects: When a force is applied a distance away from the centre of mass (COM) then we produce a turning effect or “moment”. If you have a situation where an object is in equilibrium then you can solve a problem by equating all the turning effects about any point in the situation…

Moments: When a force is applied it has to be perpendicular to the distance to be classed at a moment. To solve problems you sum up all the moments applied “perpendicular” to a point…

See-Saw: When we have simple see-saw we can sum up by just balancing from the middle of the see-saw and add any Wd from the pivot point..

or if you have two people on one side…

Complex Moments: Now what happens if the see-saw is not equal on each side. Now the weight of the see-saw must be taken into account when taking moments. This acts from the COM but looks strange at first…

Non- Perpendicular Moments: Often students get caught out by these problems. However, all you have to do is work out the component of the moment which is working at 90° to the slope or perpendicular. In this case the weight of the bar acting half way along the bar is balanced by the vertical component of tension in a cable. Remember the horizontal acts through the point of moments thus isolating it from the balance point. Also note to convert everything to forces! (9.81Nkg-1)

Couples: These are simple pairs of equal and opposite forces acting on a body which cause a turning force or “torque”. The more “torque” the harder it can push an object. Tractors have a lot of torque to pull loads. Racing cars have lower torque as they don’t need the same pulling force. We can take moments about any point on a couple. However, it is easier to do it about the pivot point if that is possible. It does not matter where you take the moments as the couple always comes out to be Fd Take look at this example taken about “A”.. 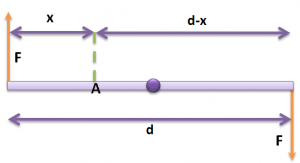 Single Support Forces: If we think about the pivot point in this prism supporting the weights acting downwards we simply summate the forces regardless of where they are acting. This can be used in conjunction with a moments equation as well.

Double Support Forces: If we think of a simple table as an example the same principles of forces and moments applies.

However, we must set up two equations for the unequal support forces. We have in take moments first from point X, then point Y to give us two equations. 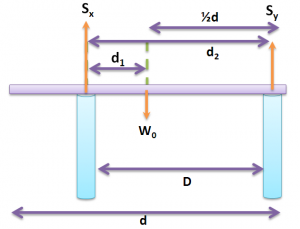 Stable Equilibrium: If an object such as a flower basket or a bookshelf is displaced by a force it will return to that point. This is a situation where the centre of mass must be inside of the pivot point. Fd < Wb/2 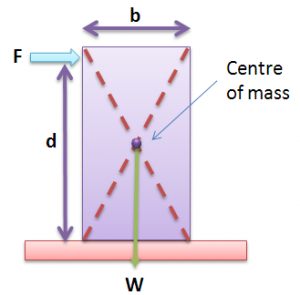 Unstable Equilibrium: If it is displaced slightly it will not return to that point and will topple over. This is a situation where the centre of mass is outside the pivot point. Fd > Wb/2 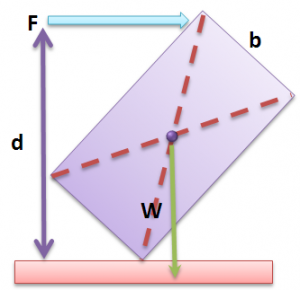 Unstable Equilibrium Calculations: We can use the dimensions of our problems and the theory of moments to setup an equation about the pivot point. Weight acts through the centre of the base and the force acts a distance d up the side of the block. 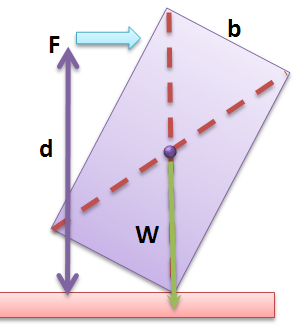 Toppling Vehicles: We also find trig and moments useful when deciding at which angle a vehicle will topple over on a slope. If we know the geometry of the centre of mass and middle of the base we can construct a triangle of an angle which creates the ratio of similar forces. The geometry causes the forces to act. 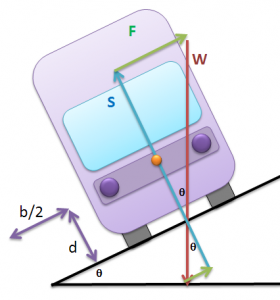 A Simple example would be a lorry has a wheelbase of 2.1 m and centres of mass unloaded of 0.7m from the ground. What is the maximum angle it can drive at before toppling over…. 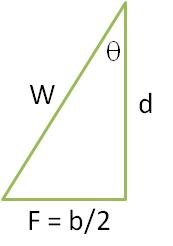 Permanent link to this article: https://www.animatedscience.co.uk/forces-in-equilibrium-mob-rev