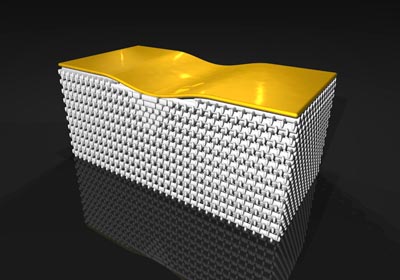 3-D invisibility cloak hides gold “bump” The first device to hide an object in three dimensions has been unveiled by a group of physicists in the UK and Germany. While the design only cloaks micro-scale objects from near-infrared wavelengths, the researchers claim that there is nothing in principle to prevent their design from being scaled up to hide much larger artefacts from visible light. The origins of this design date back to 2006, when David Smith and colleagues at Duke University in North Carolina created a cloak that could bend microwaves around an object, like water flowing around a smooth stone.

This early cloak was made using a metamaterial – an artificially constructed material with unusual electromagnetic or other properties – which consisted of a cylinder built up from concentric rings of copper split-ring resonators. This first cloak, however, only worked in two dimensions – in other words, looking at the cylinder from above revealed the presence of the shielded object.

Carpet cloak Now Tolga Ergin and colleagues at Karlsruhe Institute of Technology in Germany, together with John Pendry of Imperial College in London, have overcome this problem by creating a “carpet cloak”. Proposed in 2008 by Pendry and Jensen Li, this involves hiding an object underneath a bump on the surface of an otherwise smooth material – just as something might be hidden under a carpet – and then smoothing out the resulting bump. This is achieved by creating a bump on a flat mirror and then placing onto the mirror a layer of metamaterial with optical properties such that light appears to reflect off the mirror as if the bump were not there. This technique was demonstrated experimentally at two different wavelengths last year, with Smith’s group showing that it worked in the microwave region while researchers at Berkeley and Cornell University near New York obtained similar results at infrared wavelengths. However, these cloaks were also limited to just two dimensions.

Ergin’s group has made a carpet cloak in three dimensions by stacking nanofabricated silicon wafers on top of one another in a “woodpile” matrix and then filling in the gaps between the wafers with varying amounts of polymer. This achieves the desired distribution of refractive indices within the structure. Hiding the bump The cloak structure was then placed on top of a reflective gold surface containing a bump, leading to a cloaking effect using unpolarized light with wavelengths between 1.4 and 2.7 µm – the near-infrared. Importantly, this effect held for viewing angles up to 60 degrees (with zero degrees representing viewing in just two dimensions).

The bump, however, was very small – just 30 µm (10–6 m) × 10 µm × 1 µm. Team member Martin Wegener says it should be possible to use existing technology to make the cloak bigger in order to hide larger objects, but that this approach would be extremely time-consuming. “Faster nanofabrication tools will have to be developed allowing for three-dimensional structures,” he adds. For Wegener the aim of the work is not about focusing all efforts on creating invisibility cloaks, but is about exploring a range of applications in transformation optics.

This involves calculating what kind of material is needed to bend light in a certain way, by considering light trajectories as the result of the warping of space. Wegener says that transformation optics should lead, for example, to the design of better antennas or smaller optical resonators. Smith describes the latest work as “very exciting” and agrees that its real importance lies in the development of transformation optics. “Demonstrations like these are paving the way for transformation optical design to become an established design methodology, like ray-tracing,” he says. The research is published in Science.

Permanent link to this article: https://www.animatedscience.co.uk/2010/3d-invisibility-cloak-unveiled